It Is Not Always Fun Being a Breeder (Warning) Graphic photos. 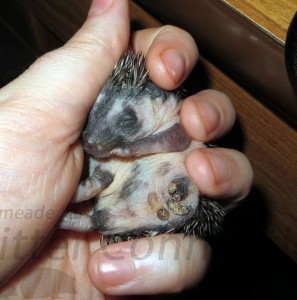 Breeding Hedgehogs is Not Without Risks

Jason and Grace first contacted me because their “male” hedgehog that they bought at a pet store gave birth a week after they brought he/she home.  Combined with other family circumstances this surprise was very overwhelming for them.  They were very afraid for the safety and well-being of both momma and babies.  By lifting up the clear Steralite tub they were able to see 8 babies.
Jason: So were having a bit of an issue right now. After our normal playtime with the hedgies everyone was settling back in and now Sebastian is having fits, shes chewing at one of her own teats, has vomited twice, and we really don’t know what to do. Both of our vets are out, and I cannot find any information on the web about this sort of behavior. Any help would be greatly appreciated. 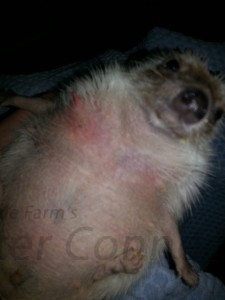 At this point in time I, Gail, had never experienced an issue like Jason is describing and I suggested they take her to an emergency veterinarian.
Grace: Jason and I took Sebastian to the emergency veterinarian.  Sebastian was diagnosed with mastitis in her topmost right nipple.  There is some bleeding there because she was biting herself, but the concerning part of this is swelling and a small lump in the area from the under the skin infection.  Also right around the time she went absolutely nuts last night (around 7:30pm) she had very loose and green stool and vomited what looked to be froth.  She only vomited once, but the loose stool lasted on and off until we went to sleep.
This morning the stool was firmer, but still dark green.  I’m of the opinion the vomiting and perhaps some of the loose stool are side effects of the stress and pain of her infection and self mutilation. This morning she was calm and not biting herself.  In fact she was nursing the pups whenever she was checked on prior to Jason leaving to work around 10am.The vet gave us several medications.  One anti inflammatory, 2 antibiotics and a probiotic to offset.  I very carefully watched the vet tech administer the anti inflammatory last night and it seemed quite simply.  However when I went to administer the antibiotics this morning Sebastian was having none of it.  Not at all.  Struggle, attempt to run, huff, quill, more huff, more quill, no interest in being bribed with treats.  I think she ended up with more on her muzzle than in her.  I ended up leaving the probiotic mixed with some mashed banana and am just hoping she eats it.  It was a very trying experience.  So we learned not all hedgehogs like treats.  Hedgehogs can get mastitis.  And I think we learned that severe pain may cause vomiting for no particular reason, but I’m still not sure on that point.I watched a couple of videos today showing once again how best to administer the oral meds and unlike the vet tech last night, they all recommend going in at the side of the mouth instead of the front.

Along with the meds I’m going to try warm wet paper towel compresses over the area to help loosen up any dried milk that there may be and also to help keep the area clean because she really did bite the heck out of herself.  I’ll let you know how things go.  I know the warm compress really does help with under skin infections drawing the infection to the surface where it can drain off.  I had to do it for my oldest cat for a few weeks and it worked wonders in tandem with antibiotics.

If I can’t get her to be still long enough for a compress I’ll have her just walk through an inch or so of warm water every evening until this clears up.  She really needs to be kept as clean as possible.  I’m not a vet, or a breeder, but some things are just common sense.  Dirt and infections and open wounds just don’t mix well.

You can see not only is the teat itself red and irritated but also the swollen flesh and redness up and around the teat.

As I said, last check in around 10am momma was relaxed, if not ok.  And the pups are good to go so far.

Also the vet indicated that if Sebastian does not show improvement over the next 24-48 hours she wants to do blood tests.  Given that there are pups involved I requested we hold off on this unless it was considered absolutely necessary.  Had there been no babes, she would have been left with the vet overnight for a whole round of testing.

Note: the hoglets traveled like champs sleeping most of the way and not really taking much note of the goings on.  Sebastian did most of her self biting and fussing away from them both in the pen originally and in the cat carrier we had to use for travel with the babes all tucked into a carefresh nest in a box in the carrier.  Accessible, but not underfoot.

I’m so thankful she did this in our presence and not at 3am.  She had no signs of swelling or anything when she was flipped over yesterday morning, and when we picked her up last night for play we didn’t flip her.

Here is hoping this experience adds to your treasure trove of knowledge and also if any of this tickles a random hedgie care memory please let me know.  Once again we find ourselves on the edge of panic over our prickly little child.

I attempted to bathe her in cool water but yet again she was having none of it. She refuses to be still for me even though she received wonderful compliments on her behavior with the vet and vet techs last night.  She isn’t raising her quills or anything, but she will simply not be still at all for bathing or meds or even cuddles.  The good news is she still seems calm unless she is being held and I did in fact come home to a calm momma hedgie nursing her pups.  Just none nursing on the sore teat.  She is keeping that one out of reach which may present a problem with healing.  I have no idea how I’m going to get her to be still long enough for a compress.  But I will try and I will also attempt to massage the sore area gently and hopefully “milk” her a little to help to release some of the toxins that are built up in there.

She did eat 3 mealworms.  They were her first and I take this as a good sign for future bribery.

Thank you to the many breeders who have contributed to the creation of this article.  Photos and experiences are recognized within the article.